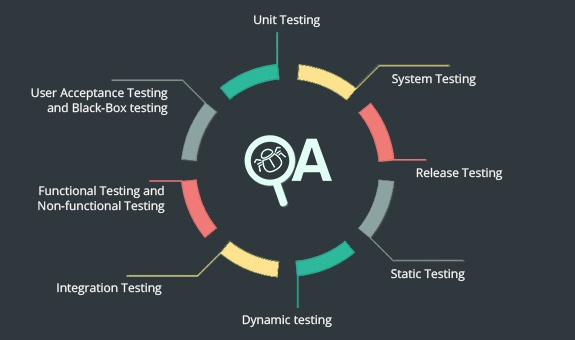 SDLC is a conceptual model or process or set of activities step by step from gathering requirement to development including maintenance state so that software can develop with quality.

Positive test case is a normal walk through of the application which is identically related to the functionality that is written in the Stories.

Negative test case (N-Case) is done to verify all other unwanted input that is not accepted by the application. (“Abusing” the application and making sure application doesn’t crash but only displays a friendly “error” or “not allowed” message).

In N-CASES fields validations should be done by :

When actual result is not the same as expected, is called Defect. During the Sprint or any other testing period QA creates bug report if QA find any bug and assign to developer according to Product Owner’s concern. Developers then fix the bugs and forward to QA. At that point QA should verify all bugs with status “Test in QA”. If bugs are fixed QA changes the status to “closed”. If bugs are not fixed QA changes status to “Re-Open”.

Testing application or front end from the user point if view without looking the code. Black Box testing techniques:

Security testing is basically to check that whether the application or the product is secured or not. Can anyone came tomorrow and hack the system or login the application without any authorization. It is a process to determine that an information system protects data and maintains functionality as intended.

Smoke Testing is a kind of software testing performed after software build to ensure the critical functionalities of the application are working fine.It is executed before any detailed or regression testing. The purpose is to reject a badly broken application so that QA team does not waste time for installation and testing the application. Ex: High level positive Test or launches the application/modules successfully.

This kind of testing usually performed after receiving a software build with minor changes in code or functionality to ensure the new functionality or bugs have been fixed.

Repeating the large number of same test cases on the new version to make sure nothing been broken any other part of the application after injecting the new codes or changes in functionalities.

It a test to check whether all the modules are combined together or not and working successfully as specified in the requirement document. Ex: In a banking application testing money transfer  between Checking and Saving account.

Testing which is based on overall requirements specifications and it covers all combined parts of a system. It is also a black box type of testing.

In non-functional testing the quality characteristics of the component or system is tested. Non-functional refers to aspects of the software that may not be related to a specific function or user action such as scalability or security. Eg. How many people can log in at once? Here are few examples of non functional Testing:

In usability testing basically the testers tests the ease with which the user interfaces can be used. It tests that whether the application or the product built is user-friendly or not.

UAT-User Acceptance Testing is also called Certification testing. In UAT you have to run all customer composed test cases and then send results directly to the customer for acceptance. This procedure is done on the final stages of the project.

It is a test to check the user’s response time of number of users using multiple scenarios of the same application at the same time.

It is the process of putting demand on an application and measure it’s response and behavior as per both normal and peak load condition.

Volume testing refers to testing a software application or the product with a certain amount of data. E.g., if we want to volume test our application with a specific database size, we need to expand our database to that size and then test the application’s performance on it.

It is the testing of a software application for measuring its capability to scale up in terms of any of its non-functional capability like load supported, the number of transactions, the data volume etc

As per the IEEE Documentation describing plans for, or results of, the testing of a system or component, Types include test case specification, test incident report, test log, test plan, test procedure, test report. Hence the testing of all the above mentioned documents is known as documentation testing.